All of us have had that friend or been that friend at some point right? :’) I remember them college days, when we had learned to pick up swear words, and it was all the rage among most of us! The ones who are the closest abuse each other the most- and har chalte phirte bande pe commentry karna toh banta hai. Because- ‘Cool’. ¯\_(ツ)_/¯

It’s uncomfortable that it is socially acceptable in our culture to make jabs at each other, but respecting boundaries has been a struggle for most of us, I suppose. I remember finding it inappropriate to hear people and their bodies being commented on. But then again, “abh kaun baar baar samjhaye”.

Culturally too the idea of body and health is so varied. It’s pretty confusing for many young adults like me who’ve lived across many countries. 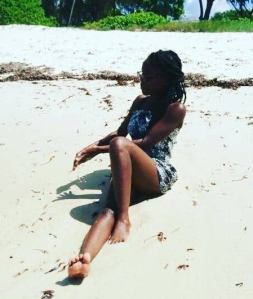 I remember my friend Purity describing her experience with body shaming back home. She struggled with terms like “kali-kalutti” in Warangal. Because.. black. “Haha”. She is this gorgeous woman with a well-proportioned body, an athletic build, and a personality to die for. But she lives in Kenya, where most women are healthier if they are more voluminous. The funny thing was that while in India her form was alluring, in Kenya, she was underweight. Unfed even! She’d have people ask her if she was unhappy in college. Call her malnourished and nudge her parents to get her home often so that she could be “properly cared for”. But the truth was, that she was always built like that. And she is more than fine! That’s her on the right. Doesn’t she look full of sass *and* grace? (:

The tricky thing about such kind of body shaming is that even though we are being playful, we influence how the other person feels about their body. One moment you’re making funny references and the next your friend’s flying off the handle, crying about something you said months ago. Uh-Oh!

Honestly, the times that I’ve felt good in my body – with the weight, dark circles, and everything – are days when I’ve felt a deep sense of love for my self.

On days when I’ve felt beautiful, strong, confident, kind, passionate and seen. And there’s power in that kind of beauty, because it doesn’t depend on your clothes or how you accessorize, It depends on how you feel about yourself. And nobody can take that away from you… So it’s here to stay 🙂

My brother Anhad calls me his ‘cuddliest’ cousin :’) He once saw me putting on eyeliner as I was getting ready to go somewhere and asked: “What’s that on your face?”. “Eyeliner”, I said. “It’s used to make your eyes look bigger”. He looked at me confused and said:

“But, you don’t need it. You look better without it”. So I listened to him! No eyeliner on dates anymore 🙂 I’ma be myself. Ruffled, and out of bed. We’ll call it being Americano.

Trust me I am one of the friendliest people I know :’) And I *do not* mind being the butt of jokes once in a while. In fact, many times, I really enjoy it too! It makes me feel more intimate with my friends 😀 But sometimes, when I feel like that’s all I’m identified with, it gets to me. And I know, that more often than not, any friendly jab is just that. Because they ARE joking! But it’s become a status quo – something that needs changing.

So, what if – for one moment – we turned the tables for a bit?

What if the sunset in the east and rose from the west?

What if we made digs at each other using complements, instead of insults? :-O

Wouldn’t that be an amusing but cozy way of getting affectionate with each other?

A simple- “Hey! You look nice today”
“I like your t-shirt”
“You make me want to be a better person” – could do the trick!

Okay, I know the last one was a bit cheesy, but you get the point ^_^

And if nothing else, then stand in front of the mirror and own that tummy tire, skinny collar bone, and freckled chin. After all, a very wise singer once said: