I did not plan on writing this post. I’m not going to edit it. I’m not going to design it. I’m going to write because I need to- I’d hate myself if I didn’t. This is not a movie review. I do not write movie reviews. Please don’t read the post if you haven’t seen the movie as it may have spoilers. I’m writing this post because I need to get it out of my system. I’m mourning and I feel a wave of word vomit I can not control.

Almost ten years ago on the remorseful fay of 26/11 Mumbai was subject to a brutal terrorist attack that took a jab at all of our hearts in a way that still hurts. As the survivors and loved ones of the demised mourne and heal from their losses, it still feels like yesterday, what happened a decade ago. Watching the attacks reported live on television was one of the most horrific things I had experienced. Have spent a large part of my childhood in Mumbai, I remembered the busy city for its life and vibrance. Watching it subject to such assault was a painful experience. I exhale slowly as I remember it. My parents spent a large part of their life in Mumbai. We moved out when I was in middle school but still have close friends and family there that we visit yearly. I remember wondering when the CST station was bombed if my creche aunty was there. I was relieved to know that she wasn’t. My childhood friend – Nikita Dabale, who I’ve known my entire life- from the time we learned to walk and ran around in pampers, still lived in Mumbai for years after. Although Santacruz was not targetted, at the time the blasts were happening, nobody knew where the next target was going to be. I was so relieved to know that she was fine. People called their friends and family for assurance.

The movie Hotel Mumbai did a stunning job of showcasing the traumatically gripping events that occurred in the bombings. They concentrated on the three out of twelve coordinated shootings that happened across Mumbai which showed a series of interlinked events. They started with the CST bombing, onto Leopold Cafe and then Taj.

The scene where people rush from the station and cafe into Taj, beating at its doors and begging for entry was the start of a scared shudder. The hotel staff heroically let the people in to protect them and as the shootings proceed the staff tried to call all the guests to warn them to stay in their rooms. I thought this was a very important part to show how devoted the staff felt towards their guests. Since Taj is one of the most exorbitant hotels in India, a vast majority of guests were larger than life public figures, businessmen and international clients.

As the day proceeded, the terrorists moved from floor to floor, luring out guests and brutally mutilating them in the name of vengeance as the staff tried to sneak as many people out as they could. The scene where Anupam Kher, a famous Bollywood actor who plays head chef of the hotel in the movie, collects his staff and informs them of the security concerns, extending them the empathy of staying to help the guests or leave if they wanted instead was a very dignified way of showing compassion and vulnerability in the face of danger. The painful story of the Indian-American family who gets

separated because of the painful events also got the audience teary-eyed. Armand Douglas Hammer, an American actor who played a lead role alongside British-Iranian actress Nazanin Boniadi in this Indian-American pair stole hearts with his piercing blue eyes and passionate valor towards protecting his family. In the entire movie, he and his wife try to work their way out of the hotel with their friend who does her best to protect their baby boy Cameron. The scene where he gets shot right in front of Nazanin while she is screaming traumatically only to look at the shooter in the eye and recite prayers over his lifeless body was the most intense scene in the movie.

This scene with Nazanin and her husband’s shooter was particularly important because: Throughout the movie, they show the terrorist attack being planned by a group which sought vengeance in the name of religion. At this point when the shooter comes face to face with Nazanin, who is Indian and also Muslim, he is conflicted about whether he should shoot her not. In his fight for his religion, the terrorist does not find it in his conscience to shoot her as it would feel like a sin. 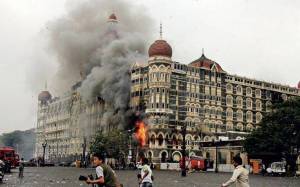 But his mentor, the lead terrorist who has brainwashed the entire troop to believe that this attack has an ulterior holy motive, tries to coax him into shooting her because she is an abomination. In this moral conflict, the terrorist decides to listen to his inner conscience and leaves her alive; showing that he is only human. Another powerful scene when one of the terrorists calls his father in the midst of the bombing attacks to tell his family that he loves them and hopes that they have received the money the ‘lead terrorist’ has promised them shows that at the end of the day, they were the very flawed and misguided boys they were shown to be; They were brainwashed into going to unspeakable lengths for their religion and to provide for their families.

The courage exhibited by the hotel staff that stayed back to help the guests spoke volumes about the bravery and dedication these people had. Both central characters Anupam Kher and Dev Patel played a crucial role in helping the hostages out of the hotel. Anupam Kher is the head chef of the hotel and ensured safe refuge for the guests in the secret harbor. He sported nerves of steel in the face of mass hysteria and panic and consistently strived to keep the guests safe and protected from the attackers.

He did so by taking them to a secret chamber and keeping their location hidden. Dev Patel, on the other hand, played a crucial role in supporting Anupam Kher by being his steady right hand through the crisis. He put his neck on the line to save injured victims and guide stranded hostages to the safe haven of the chambers. His devotion to the safety of the guests helped pacify the hostages and contain the panic. The sentiment with which he was ready to put his life on the line for his country and people really spoke volumes to the songs of Sikh valor we have heard about. It takes pure passion and patriotism to perform a feat so heroic.

As the movie went on through the second half I found myself covering my face to stop my self from gasping at the apathy within the shootings. I dug my nails into the back of my neck as I felt my self overwhelm and panic at the turn of events so that I don’t let out a terrified scream. As the climax comes around where they gather the hostages into one room I find my self slowing praying ‘Allah rehem’ (Lord have mercy) under my breath (which is odd because I’m agnostic and I’m not Muslim). I broke down sobbing into my friend’s mother’s arms as the hostages were shot down one by one and couldn’t contain myself from the trauma of the events that occurred until the credits rolled in.